I recently discovered a very weird kind of  vegetable and been savouring them in all sorts of dishes.

I used to have a choko tree in the house I rented some years back and I never knew what that ‘fruit’ was. 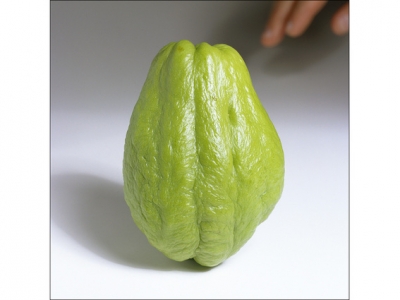 Chokos are vegetables (some called it a fruit) native to Central America.  They were taken to Europe by Spanish explorers and from there were introduced to parts of Asia.  They are pear shaped and the smaller or young ones are green and the bigger ones are lighter green in color.  The grew to be about 10 to 15cm long and are pretty solid.

The Cantonese literally named this vegetable as Buddha’s hand melon (佛手瓜 fut sao gwa) mainly because it looks like a pair of palms clasping together in prayer.

The Jamaicans called this vegetable Chocho.

Their skin are pretty tough so before cooking, peel off the skin and cut into halves to remove the seed.  Chop the chokos in bite sizes or thinly sliced into strips.

Stir fry is the best way to cook them.  I added garlic, chicken stock, egg and a dash of soya sauce, oyster sauce (or hoisin sauce) and finished off with a dash of Chinese wine. 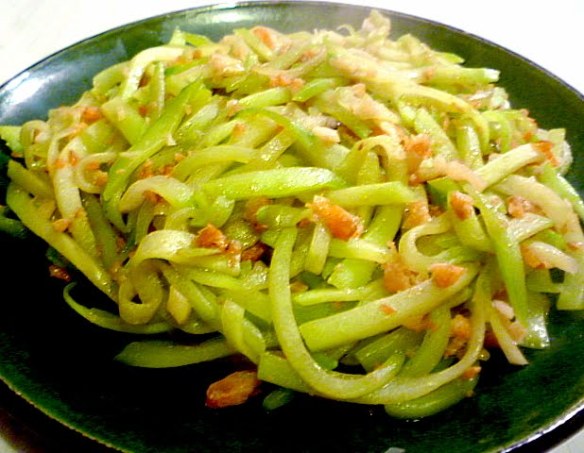 Chokos are delicious and has its own natural sweetness.  I also used it as a filling for spring rolls.  Sliced thinly and stir fried the same way as above, add a spoonful of cornflour (diluted with water) to thicken the dish.  Leave to cool and then fill into spring rolls sheet.  I usually make them in batches and freeze.  Handy to pan fried when ready to eat.

Choko tastes a bit like ‘Bang Kuang’ (Jicama or Mexican Turnip) which are not available in New Zealand so Chokos are great substitute for homemade Popiah (Hokkien name for Spring Rolls that are not deep fried) and Spring Rolls.

One important tip to note before you start picking any fruits (veggies) thinking they must be chokos and start cooking them.

Moth plant has a sap that irritates our skin when in contact and is a deadly weed.  They are lighter (in weight) not a solid as chokos. 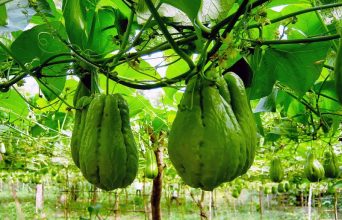 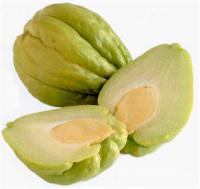 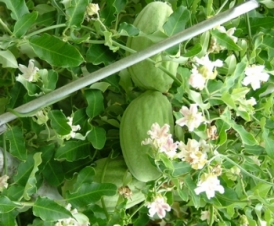 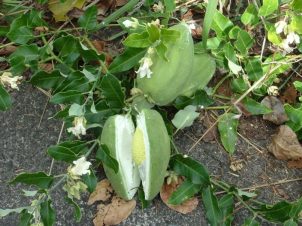 I am a bit weary in the beginning when I first ate chokos with the phobia that I could be poisoned by eating moth plant instead.  Anyway, there is no way that anyone could be mistaken because the skin texture is different, the weight and if you are still not sure, once you cut open the choko and moth plant, you will notice the moth plant have a milky sap.  If not sure which is which, please use gloves to prevent the sap from irritating your skin.

If you are still not sure, click here to check out when a Choko is not a Choko, courtesy of Just like my Nan made.

Can you identify the difference?  Which is choko and which is moth plant?

5 thoughts on “Ways of cooking Chokos”