It has been a week since I returned from my trip to Huizhou, China and Kuching, Malaysia.  That whole trip was memorable as the highlight was to attend the wedding banquets of my eldest daughter and her partner of almost ten years who is now her husband.

My daughter Jo-Jo met her husband when she went to Palmerston North, as an overseas student in 2003 and they had been together since.  Finally early this year, both decided to complete the journey with a simple wedding ceremony in the Rose Garden in Palmerston North, New Zealand (click here for the full story).

This celebration was extended till last month where our family and the couple went to our home countries to host wedding banquets in Huizhou (groom’s) and Kuching (bride’s).  As in any Chinese culture, wedding is considered a joining of two families, thus once the bride and groom decide to get married, both families get involved (living in a foreign country, this is not necessary so for us although I had Vincent calling me one night asking for my daughter’s hand in marriage.)

Back in Huizhou, it was not until my mum brought up the topic of dowry that I realized that dowry had never been in the conversation.  In direct translation as in the olden days, dowry means the ‘bride price’.  We are of Chinese heritage and every single Chinese Malaysian (or Malaysian Chinese, which means the same thing) practice dowry giving, at least in my generation.  The word ‘dowry’ sounded so old fashioned but old fashion as it might be, to me, a dowry is a symbol of respect for the bride’s family for raising up their daughter and an acknowledgement of thanks for handing over their daughter’s hand in marriage to the groom.

It is customary for the groom to give money to the in-laws in the form of red packets (Ang Pow or Hung Pow) even to this day.   Dowry ‘Ang Pow’ are usually in tokens of double 88, 8888 as eight (8) means wealth.  However in my case, I had given away my daughter’s hand in marriage to her husband without a dowry.  This young couple had no idea about dowry, having live in a foreign country like New Zealand where ‘dowry’ is a foreign world.  Being a first time mother-in-law, I too had totally forgotten about this tradition.

Tea (pang teh) ceremony where the couples served tea to their elders as a form of respect was not forgotten though. While on this topic, I searched the internet and found this article that sums up the customs of a typical Malaysian Chinese wedding by Aaina Rambli – Thank you for the writeup which I will share here (click to read more).

Most Chinese rituals and customs have been lost or amended over thousands of years of civilization.  For auspicious occasions such as weddings, Chinese New Year and mid-autumn or mooncake festivals, I always feel good while celebrating these festivals remembering our roots, our culture and our heritage.

Thinking back on the event, dowry or no dowry, traditional or modern, local or foreign, Jo-Jo and Vincent’s wedding was a very precious moment for the couples and both the bride and groom’s families and relatives.  It was memorable and a great celebration which will be remembered fondly by everyone who attended the wedding banquets.

My daughter’s wedding was also as ‘simple and sweet’ as her mother’s. 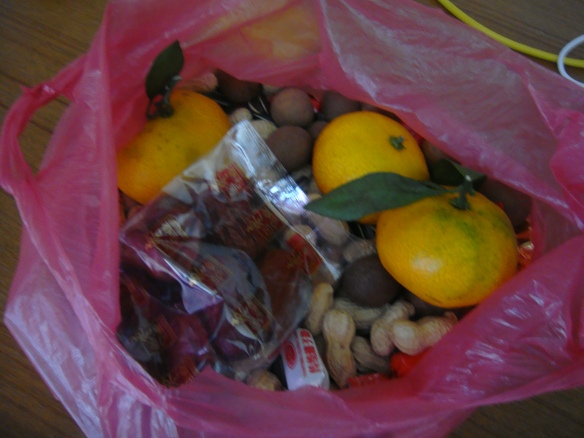 Nibbles provided in our hotel room by the groom’s parents. 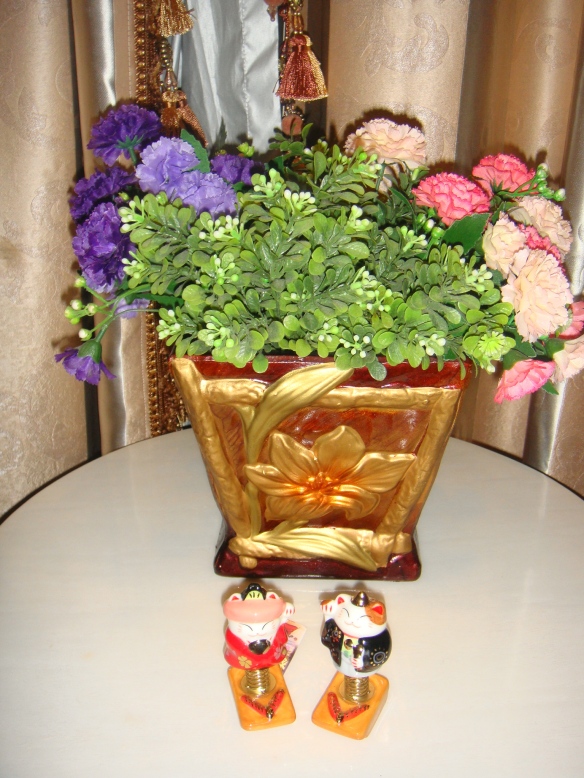 Bridge & Groom (My camera battery went flat and this was the only photo I snapped so blame the photographer or the camera if this photo does not do the couple justice.)

This shot is by a skilled photographer.

Pang Teh – Tea Ceremony to PoPo (Great Aunt) in Kuching